Industrial separators of metal impurities are a leading product produced by Eljot. The most common applications used for separation of ferromagnetic and paramagnetic impurities of each product type that can be found in the production process are listed below. The hundreds of applications and analyzed cases do not exhaust the construction capabilities of our company, what was often proved by providing original solutions dedicated to a specific situation. If you do not find an application which fully meets your expectations in the following list, please contact us in order to examine the problem together.

Any ferromagnetic contamination occurring in the industry, which succumbs to a magnetic and electromagnetic field, can be separated in many ways. The selection of the best solution depends on many factors, which include among others:

The collected complete data allows to select the optimal solution.

Over-belt separators are mainly used for the refinement of bulk products transported from the conveyor belt equipped with a rubber band. There are two ways of installation - i.e. transversely to the direction of the band movement, and longitudinal to the dumping of the conveyor belt.

Depending on the amount of the transported product and other factors mentioned above, we can distinguish two main divisions of over-belt separators.

The power supply unit and its control cabinet mounted locally or at any place designated by the customer is a key component of the electromagnetic separator. Due to the physical properties of electromagnets, it is not recommended to operate them continually. If there is such a need, a SEN series electromagnetic separator can be installed together with a metal detector (e.g. a SECUS-D series detector) that is designed to stimulate the separator to work at its maximum capacity after it detects metal. 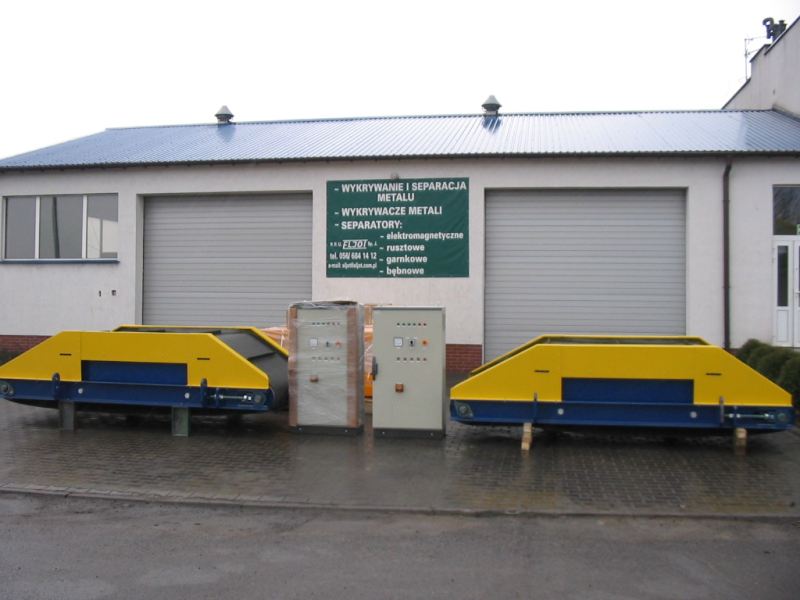 The scope of applicability of the SMN series over-belt magnetic separators is very similar to SEN series separators. However, they have the advantage that they emit a magnetic field on a permanent basis, therefore, they can work on a continuous basis without the need to use a metal detector. In addition, their self-cleaning band drive is the sole demand for electric power. We also have applications of SMN series separators with a hydraulic drive, what allows us to use them in solutions with a difficult access to sources of electricity. 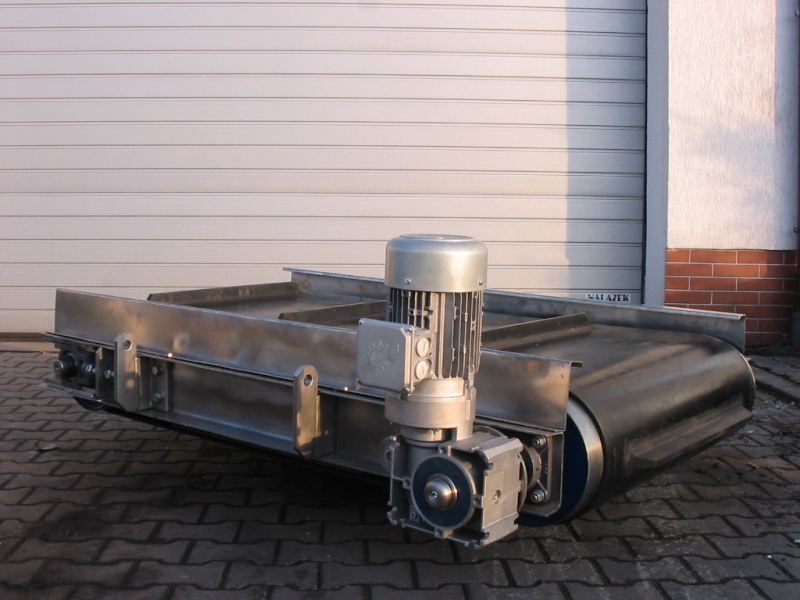 The most popular applications of SEN and SMN series separators are as follows:


Depending on the line performance, we can offer you standard solutions for conveyors with belt width up to 2000 mm. However, if there is a need to construct a larger separator, our engineering department will also undertake such a task.

In the case when product impurities are incidental, it is possible to just use the sources of SEN and SMN series field separators. In this case we are dealing respectively with the BEM type electromagnetic block and BM type magnetic block.

It should be noted that in a multitude of cases the application of SEN and SMN series separators overlaps, however, our experience allows us to select the most optimal solution in terms of quality and price.

Our offer include all devices mentioned above in ATEX execution 3D, 2D and 1D.

The operation principles of the SMB series drum separator lies in the fact that the product, which is being purified, falls by dint of gravity in the dumping in a form of a stream. The impurities get attached to the conveyor belt and are taken "under the drum" in the direction of the belt return. Visually, this type of separators looks very much like the standard drum separators, which are an essential part of conveyors. 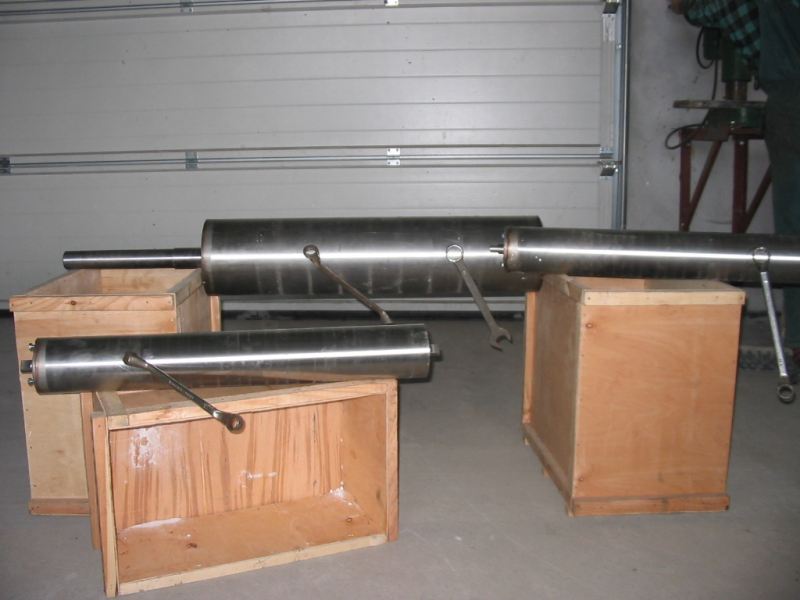 SMB series drum separator with an ZXXX extension, where X varies depending on configuration, is an independent separator that has an inlet duct for the purified product and two outlet channels - one for the purified product and the other for impurities - in the basic configuration. The drum separator consists of a steel core that acts as the fixing element, which embeds the magnetic and rotation jacket fill made of stainless steel, which is fastened with spurs that facilitate separation of ferromagnetic impurities.

The ability to work without supervision and the fact that the separation is done without stopping the production line are the advantages of this separation system. In order to maintain optimal working conditions it should be ensured that the purified product covers the entire width of the drum with a regular layer.

To this extent, one can use vibrating feeders for instance. If we are confronted with a product that has very unfavourable properties, we can use a cascade connection with the next grate or drum separator. 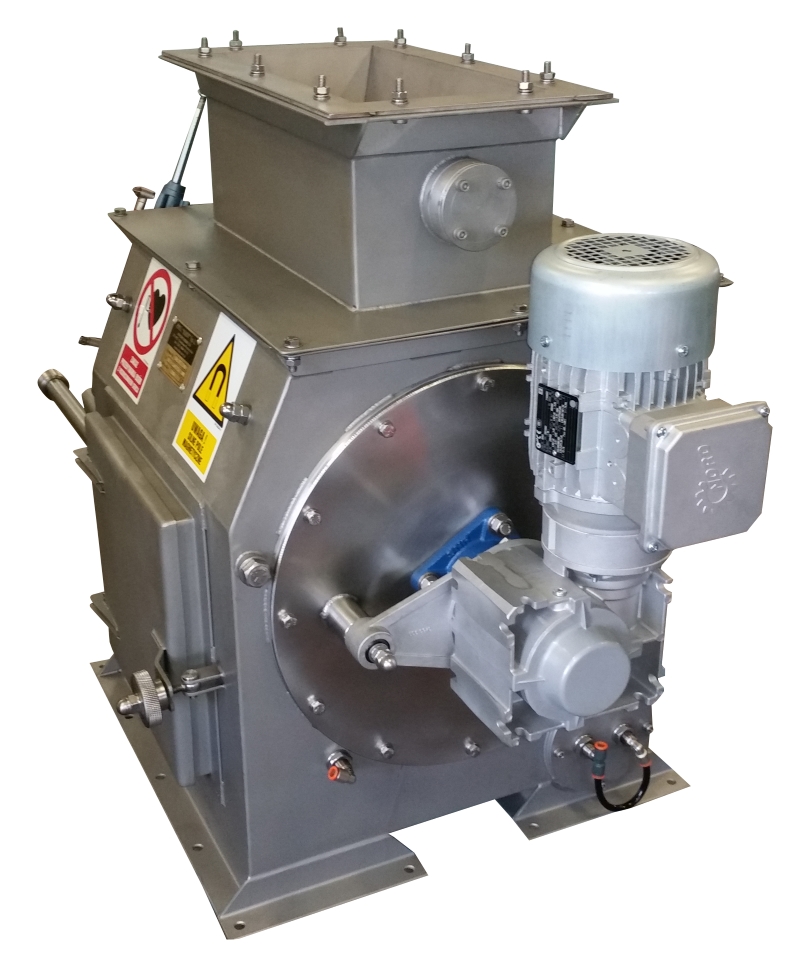 The major idea behind the SMR and SMRO series grate separators is the isolation of ferromagnetic impurities in bulk materials. The method involves separating the product by gravitational pouring of the material through a magnetic grate, resulting in a direct contact of the product with the magnetic rod, what facilitates the separation of impurities and their settling on the surface of the separator.

Depending on the level of advancement, the grate separator purification systems are divided to four basic types: 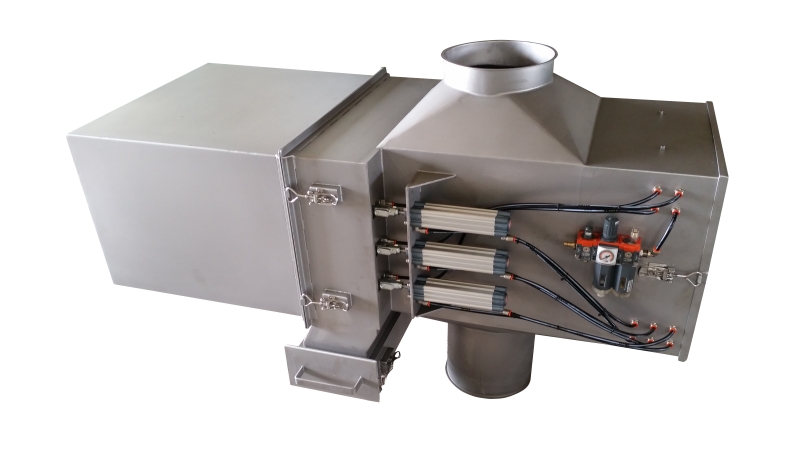 These types also apply to SMRO series separators (circular cross section of the conveyor installation). Given the variety of applications - size of the transportation system, type and product characteristics, degree of impurities, destination - grate separators of all types are characterized by a large freedom of configuration of the individual components - i.e. the cross- sectional size of channel separation, the number of drawers, bar diameters, etc - in order to obtain an optimal solution to fit the customer's needs.

A SMG series pot separator has a similar operation principle to the grate separator. Taking into account the type of product, its range of applications is similar, however, it is fitted in overpressure installations. Additionally, its big advantage is the ability to be used in highly viscous products resembling honey or chocolate. 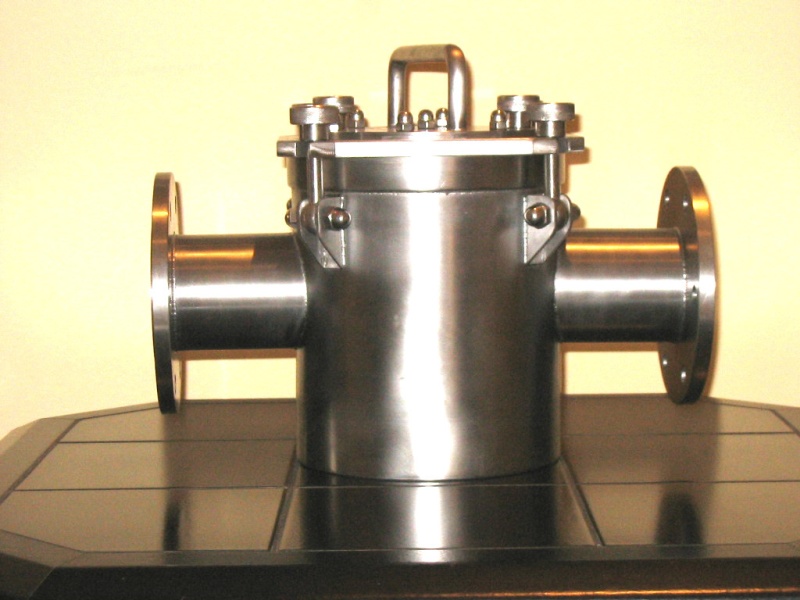 Depending on your needs, we can design a SMG separator in various dimensions and options which include: water jacket, extra insulation, two inputs or outputs of a product, a built-in filter mesh for organic or solid impurities. 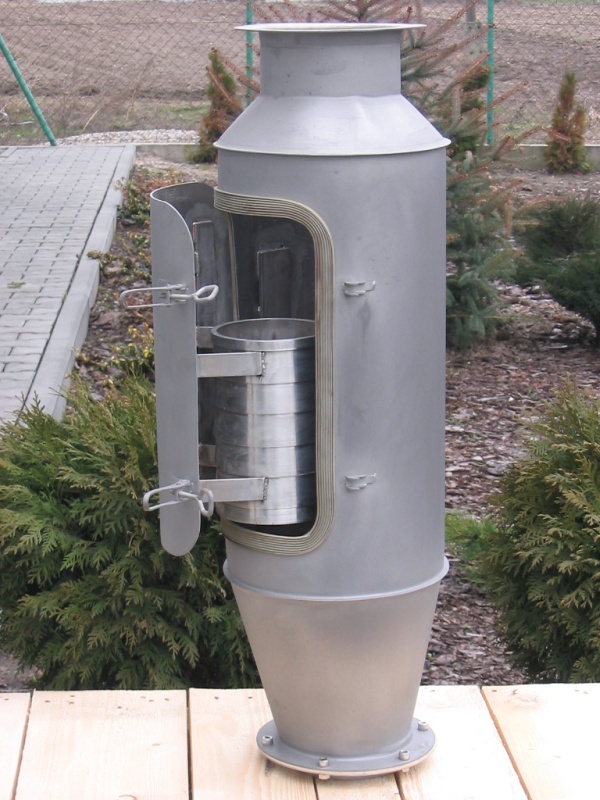 Magnetic separators called recuperators are used for recovery or separation of ferromagnetic materials like magnetite, ferrosilicon, and iron oxides from liquid. They are used in mining for the recovery of magnetite from heavy liquid. We manufacture recuperators in different versions depending on their intended use, performance and technological conditions. We are able to adapt the device to the user's requirements in terms of building performance and separation efficiency. The recuperator drum coat can work according to the direction of the feed stream as well as counter-wise.

Thanks to the shaped bottom of the tank, we get longer residence time of magnetite in the magnetic field, resulting in greater efficiency.

The magnetic field is generated by high-performance neodymium magnets, grade N38 or higher, in the device recommended by us. The base of the magnets is mounted pendulously on the axis of rotation of the drum and it has a regulatory arm that should ensure optimal positioning of magnets for the highest efficiency.

Magnets are arranged in such a way that the greatest attraction is located in the spot of the liquid flow and then decreased toward the extol of magnetite outside the chute. Additionally, we equip the recuperator with a scraper that is pressed with a counterweight in order to fully clean the drum of the ferromagnetic remains.

High performance of the magnetic field induction in the operation gap of the recuperator allow to use a single device in the isolation node, without the need to build up a cascade of several separators. This allows to simplify the process of magnetic recuperation by replacing two devices which one, what reduces the cost of electricity consumption.

It is recommended that all ferromagnetic impurities should be previously separated. 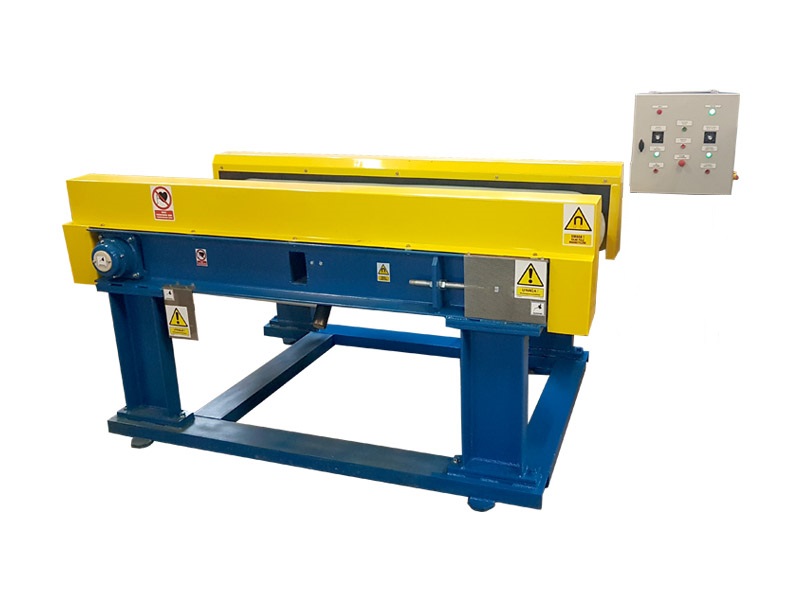 In addition to the selection of the separator band width, the configuration of the ECS series eddy current separator may include different types of systems receiving or feeding the purified product. Their optimal choice can be made after careful consideration of your needs. We would like invite you to contact our company directly.